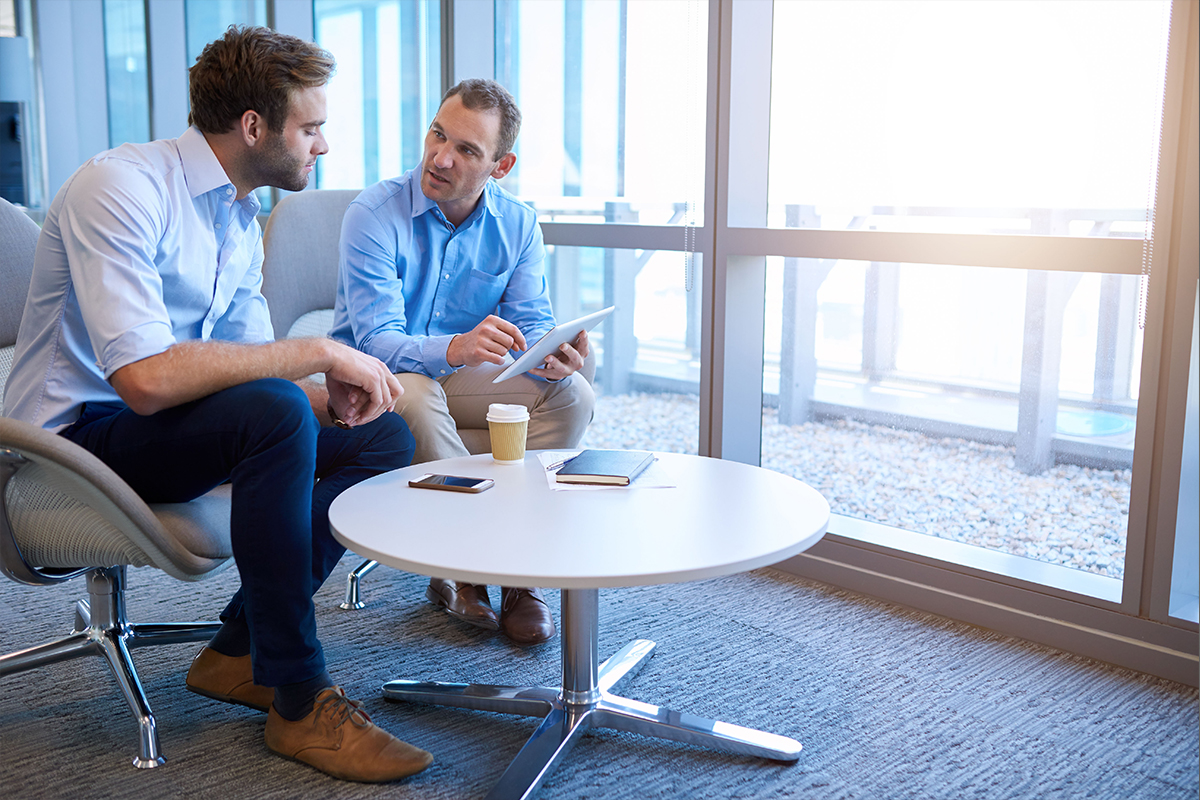 Communication is one of the keys to operating a successful business. Occasionally, you’ll need to have a difficult conversation with an employee. Discover how to handle those tough moments.

Nobody likes to have difficult conversations at work.

A Harvard Business Review article does a great job of highlighting the reason why:

“Perhaps your boss lashed out at you during a heated discussion; or your direct report started to cry during a performance review; maybe your client hung up the phone on you. As a result, we tend to avoid them. But that’s not the right answer.”

Difficult conversations are both one of the least desirable things in business and one of the most important. If you don’t have these conversations, you can never implement change in a business.

More importantly, you can never confront the behaviors that prevent a business, or a person, from reaching full potential.

And I know this from first-hand experience.

Recently, I worked with the board of a business who wanted to improve the performance of their CEO. We did a lot of work together to identify interferences and figure out what the board itself could do to improve.

But, I knew I needed to have a difficult conversation with the CEO.

I had to work with him to confront the damaging behaviors that held the business back.

It was an emotional situation, and it’s one that didn’t get resolved easily. We had arguments and there were moments where I didn’t handle the conversation as well as I could.

But we eventually managed to get through it.

That experience taught me some invaluable lessons about dealing with difficult conversations. Take these lessons and apply them the next time you need to have a tough talk – be it in life or business.

Tip #1 – Talk to Somebody About the Conversation Beforehand

Start with the personal responsibility aspect of the conversation.

What are you going to bring into this encounter? Are the criticisms you’re about to levy justified? And have you structured the intended conversation in a way that will lead to a positive outcome?

These are all important questions. But they’re also difficult to answer by yourself.

To help with this, consider talking to somebody outside of the business.

Explain the situation from your perspective and what you hope to achieve with the conversation. This person can provide an outside perspective that offers insight into the points you intend to make. Perhaps they can tell you if you’re being a little harsh, or if you’re attacking a person instead of their behavior.

This outside perspective may help you create clarity ahead of the conversation. And having that clarity means you can approach the discussion with more confidence.

Tip #2 – Know What You’re Walking Into

Let’s come back to the conversation I needed to have with my client’s CEO.

I’d already talked to both the board and CEO about the board’s feelings regarding his performance. That meant I knew that the CEO already had a bit of a bruised ego. He’d already taken a shot to his pride and likely felt unsafe going into the conversation.

That lack of safety could lead to a fight-or-flight situation. It can create an open hostility that makes it difficult to achieve the conversation’s intended outcomes.

In short, it was a pretty turbulent situation to walk into.

But the important thing is that I already knew this going in. I knew how the CEO felt beforehand, which allowed me to create a strategy for the conversation. And although things didn’t go quite according to my plan, the lesson still rings true.

If you know what you’re walking into, you can preempt your own reactions.

For example, knowing there may be some hostility at the other end of the table allows you to anticipate and plan. This means you get to be proactive, instead of relying on your reactions to steer you through the encounter.

My plan for my conversation with the CEO was to meet up for breakfast and have a chat. So, I sent a text to see if he wanted to join me for a little bite.

A short and sharp response that told me that this guy didn’t trust me.

So, we met up at the office instead. And for 15 minutes, he refused to engage with me. I told him I was ready to engage when he was and he told me that it would probably be a while.

Sometimes, the other party needs a little time until they can start feeling comfortable with the impending situation.

But in this case, a few hours went by without the CEO trying to engage with me. I eventually realized that he wanted to stall me out, so I had to initiate the conversation.

The lesson here is that it’s okay to give somebody a little time if it will help them when the conversation starts. However, you can’t allow them to control the conversation to the point where they prevent it from happening.

Once I felt that we’re finally going to have the conversation, I knew I was coming into an openly hostile environment.

Things started with the CEO talking about all the things he’d done on behalf of the board. I gave him the time to talk because it gave me some insight into his viewpoint. But eventually, I turned the focus on the behaviors that I felt needed to change.

I really wanted to come at this from a position of love and empathy.

Unfortunately, the situation escalated pretty quickly and we both became angry and irrational. We started shouting at each other, which derailed the conversation.

The simple lesson here is that you can’t allow that to happen.

If the other person gets angry, keep your cool and stay focused on your desired outcome. If things do escalate to a bad point, don’t be afraid to take a break from the conversation. Give both parties the chance to cool down before coming back to it.

Tip #5 – Apologize If You Lose Your Cool

After we’d both lost our cool, we both took a break from each other. He’d accused me of some hurtful things and I’d responded with attacks on his performance.

Both of us had bruised egos, and we needed the break.

I’d made a mistake in allowing the conversation to escalate into an argument. However, I fixed that mistake when I swallowed my pride and apologized. After we’d both cooled off, I held my hands up and said that I was sorry.

The CEO did the same.

And that was the turning point for us.

We both recognized that things got heated because we’d acted inappropriately. By confronting and resolving that argument, we created a better platform for our next crack at the conversation.

Tip #6 – Work Together to Resolve the Issue

We’d had a blow-up and made our apologies. Now, we were finally at a place where we could start working together.

The CEO showed me a past presentation he made to the board that covered what he was going to do. By working together, we figured out what he’d done and what still needed doing.

And through that process, I discovered that many of the examples the board gave of poor performance were actually legacy issues. In many cases, he was in the process of correcting issues we’d already raised.

The CEO felt so attacked because he felt like his work in these areas wasn’t recognized.

But by working together, we established this new frame of reference. We gave context to the real grievances that the board had focused on more recent issues.

The lesson here is that you may not always have all of the facts.

You certainly may not have the correct context for the conversation if you’re relying on information from somebody else. But if you work together with the person you’re talking to, you can understand their perspective.

From there, you can build a base of trust and confront the issues that do need addressing.

Tip #7 – Give Credit for Momentum

Thanks to our conversation, I got a clearer picture of what the CEO needed to improve on and where he was already taking action.

We stopped focusing on legacy issues and started working on the stuff that really mattered.

And as for the stuff he was already fixing…

I gave him credit for the momentum he’d created in those areas. I recognized that he’d already started acting on some of the stuff we talked about. And that simple act of recognition created even deeper trust between us.

It meant that he’d listen to me when I pointed out interruptions that still needed confronting.

This is an important lesson because you can’t just attack somebody’s performance. In many cases, there are positive things to talk about, too. By giving credit where it is due, hostility tends to dissipate.

Can You Handle the Tough Talks?

I learned some valuable lessons from this difficult conversation. And I’ll take all of that forward into the tough talks that I’m sure I’ll have in the future.

Hopefully, you will too.

The hard lessons I learned can help you to avoid making the same mistakes I made during this conversation. Use them to give yourself more confidence in terms of dealing with such conversations.

As much as the tough conversations aren’t enjoyable, they’re still vital to your success. You can’t avoid them if you want to build a business that’s capable of growing sustainably.

And whenever you’re ready… here are 3 ways I can help you make you and your team more productive in order to grow your business:

1. Join the Executing Executives Facebook Group and connect with other business owners who are strategizing to execute, too. It’s our new Facebook community where smart entrepreneurs learn to get more income, impact, and independence. — Click Here

2. Get 90-Minute Crash Course
I’m getting business owners together this month to map out a simple plan, so they can get you and your team executing productively in 30-days. — Click here for the details, and register if it looks useful to you. Create Alignment in Your Business with the Four Disciplines of Execution The Four Pillars of Leveraging Your Team with Accountability Six Tips for Getting the Most Out of People